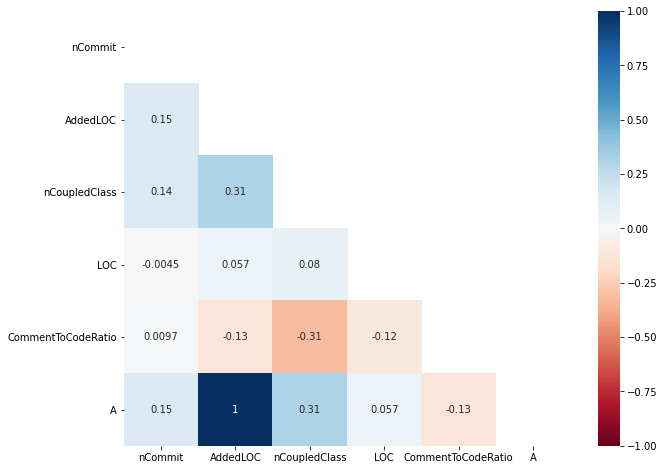 Multicollinearity is a phenomenon in which one metric can be linearly predicted by a combination of two or more metrics. Multicollinearity can be detected using Variance Inflation Factor (VIF) analysis [FM92]. The idea behind variance inflation factor analysis is to construct an ordinary least square regression to predict a metric by using the other metrics in the dataset. Having a model that is well fit indicates that the metric can be predicted by other metrics, linearly highly-correlated with other metrics. There are 3 steps in variance inflation factor analysis.

(Step 1) Construct a regression model for each metric. For each metric, we construct a model using the other metrics to predict that particular metric.

(Step 2) Compute a VIF score for each metric. The VIF score for each metric is computed using the following formula: \(\mathrm{VIF} = \frac{1}{1 - \mathrm{R}^2}\), where \(\mathrm{R}^2\) is the explanatory power of the regression model from Step 1. A high VIF score of a metric indicates that a given metric can be accurately predicted by the other metrics. Thus, that given metric is considered redundant and should be removed from our model.

In this example, we observe that LOC, A, and B are problematic with the VIF scores of above 5. To mitigate multicollinearity, we need to exclude one metric with the highest VIF score, i.e., LOC. We iteratively repeat the process as described above.

Feature selection techniques often do not mitigate collinearity and multicollinearity!¶

Feature selection is a data preprocessing technique for selecting a subset of the best software metrics prior to constructing a defect model. There is a plethora of feature selection techniques that can be applied [GE03], e.g., filter-based, wrapper-based, and embedded-based families.

Chi-Squared-based feature selection [McH13] assesses the importance of metrics with the \(\chi^2\) statistic which is a non-parametric statistical test of independence.

Recursive Feature Elimination (RFE) [GE03] searches for the best subset of metrics by recursively eliminating the least important metric. First, RFE constructs a model using all metrics and ranks metrics according to their importance score (e.g., Breiman’s Variable Importance for random forest). In each iteration, RFE excludes the least important metric and reconstructs a model. Finally, RFE provides the subset of metrics which yields the best performance according to an evaluation criterion (e.g., AUC).

Below, we provide an interactive tutorial to show that feature selection techniques may not mitigate collinearity and multicollinearity.

Jiarpakdee et al. [JTT18a][JTT20b] [JTT18b] introduce , an automated metric selection approach based on the Spearman rank correlation test and the VIF analysis for statistical inference. The high-level concept of can be summarised into 2 parts: 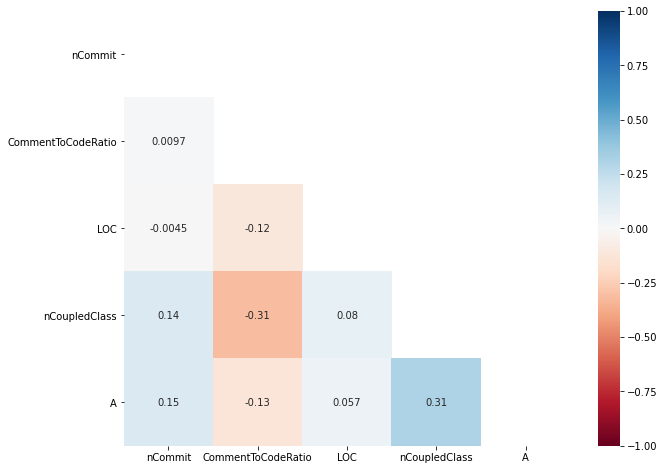 (Part 2) Automatically select non-correlated metrics based on a Variance Inflation Factor analysis. We first measure the magnitude of multicollinearity of the remaining metrics (\(M'\)) from Part 1 using the Variance Inflation Factor analysis. We use a VIF threshold value (\(vif.t\)) of 5 to identify the presence of multicollinearity, as suggested by Fox [Fox15].

To foster future replication, we provide a python implementation of AutoSpearman as a function below.

We first select the three commonly-used techniques (i.e., over-sampling, under-sampling, and Default SMOTE [CBHK02]) that were previously used in the literature [KameiMondenMatsumoto+07][KGS10][PD07][SKVanHulseF14][TTDM15][WY13][XLS+15][YLH+16][YLX+17] 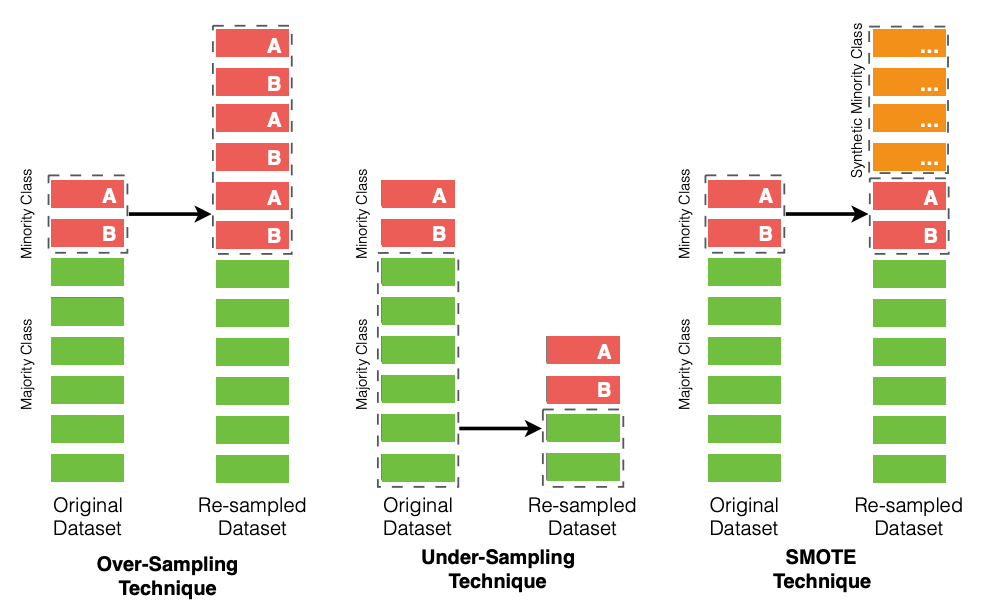 Fig. 6 An illustrative overview of the 3 selected class rebalancing techniques.¶

Below, we provide a description and a discussion of the 3 selected class rebalancing techniques for our book with interactive python tutorials.

The over-sampling technique (a.k.a. up-sampling) randomly samples with replacement (i.e., replicating) the minority class (e.g., defective class) to be the same size as the majority class (e.g., clean class). The advantage of an over-sampling technique is that it leads to no information loss. Since oversampling simply adds replicated modules from the original dataset, the disadvantage is that the training dataset ends up with multiple redundant modules, leading to an overfitting. Thus, when applying the over-sampling technique, the performance of with-in defect prediction models is likely higher than the performance of cross-project defect prediction models.

The under-sampling technique (a.k.a. down-sampling) randomly samples (i.e., reducing) the majority class (e.g., clean class) in order to reduce the number of majority modules to be the same number as the minority class (e.g., defective class). The advantage of an under-sampling technique is that it reduces the size of the training data when the original data is relatively large. However, the disadvantage is that removing modules may cause the training data to lose important information pertaining to the majority class.

Finally, SMOTE combines the synthetic oversampling of the minority defective modules with the undersampling the majority clean modules.